Why The Professional Aesthetic and Beauty Industry Should Support NAIDOC Week

This piece has been created in collaboration with the authors and representatives from the Aboriginal and Torres Strait Islander community, developed to deepen shared understanding about NAIDOC Week and our role in the professional aesthetic industry.

It’s important to us as a National community to ensure that every single face of our people are seen, validated and represented. Too often we see the aesthetic and traditional beauty industry shine light on the majority of people, meaning the minority get’s left in the dark. In Australia, 1 in 4 faces are black, indigenous or people of colour (BIPOC), so to only spotlight the majority means that 25% of our community misses out on their voice being heard – something we’re here to put an end to.

One movement we’re proud to get behind and shine a light on is NAIDOC week, a week-long of celebrations (typically held across Australia in the first two weeks of July, which instead will now be held from 8-15 November in response to the COVID-19 situation that is) to celebrate the history, culture and achievements of Australia’s First Nations people.

NAIDOC originally stood for ‘National Aborigines and Islanders Day Observance Committee’. This committee was once responsible for organising national activities during NAIDOC Week and its acronym has since become the name of the week itself, as read on the naidoc.org website. ‘Before the 1920s, Aboriginal rights groups boycotted Australia Day (26 January) in protest against the status and treatment of Indigenous Australians and by the 1920s, they were increasingly aware that the broader Australian public were largely ignorant of the boycotts, knowing, if the movement were to make progress, it would need to be active, hence a weeks work of recognition, rather than one day.

With a nod towards days such as Christmas, Easter, Mother’s and Father’s Day, it’s essential that we show solidarity and unity for all days of importance marked on the calendar, rather than just the most recognised days. To platform a lived experience and amplify a voice, we spoke with Jamie Lee, Managing Director at paramedical skin clinic Vital Effect in Melbourne and member of IBA Indigenous Business Australia and Strong women, Strong business an Association for Indigenous business-women.

Jamie Lee says that the 2020 NAIDC message of ‘Always was, always will be’ makes her reflect on the journey she’s taken to get where she is today and the lessons and experiences that journey has shown her.

“It was not always easy, memories of my early childhood are riddled with disassociation from who I truly was. Those around had made me believe that I had “dirty blood”. Actions from those around me such as family, and the community I had grown up in had projected their angst onto me – I was the butt of every indigenous, abo or black joke, even to the degree of my own stepfather’s nickname was “boonga”. If you haven’t heard of the term “It’s the sound of an abo when hit by a car or a bull-bar.” Jamie adds to the memories, ‘my own public school was given educational grants from the government for having me there, in exchange for more education on the first fleet (rather than) Indigenous culture’, which seems baffling to Jamie as she recalls and us as we type this.

Though Jamie was only a young girl during this time of growth through primary and high school, she was observant of the perceptions others were projecting onto her until one day she came to realise they couldn’t hold her back if she didn’t let them. 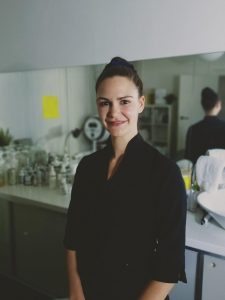 “Whilst I am a young woman growing, these are the seeds that were planted for me in my development. So, I guess you could say that once I came to realise that these seeds were not for my own being, but so that I could know the power, strength and beauty within me, that I had been really given.” Jamie Lee

When Jamie was 19, she reconnected to her indigenous family, without knowing they were searching for her the entire time. “I had a lot of signs and messages. I even have an Elder Aunty Anne Warren approach me and tell me the things about my father and myself that no one would’ve known outside of my family. I reconnected with my family and for weeks they told me stories (which) I instantly flashbacked at the signs, messages and that moment with Aunty Anne Warren. That was the first time I felt like I was apart of something, something pretty extraordinary and I realised how important it is for me to be “authentically myself” – who I am. The theme reminds me that I always was, always will be…Indigenous!”

If the name Anne Warren sounds familiar to you, it’s because Anne is the Director of Training & Chair of the Aboriginal Advisory Board, as well as pure Australian botanicals brand Li’Tya‘s ambassador. Anne is an Aboriginal Elder of the Ya’idt-midtung people of NE alpine Victoria and the Kosciusko region of New South Wales in Australia, with a lifetime of study and research into medicinal and spiritual properties of indigenous plants and Aboriginal healing techniques specific to her people.

Luckily for Jamie Lee, her industry knowledge and career have seen her fortunate enough to be headhunted for many roles and titles shes earnt along the way. “I didn’t necessarily find being indigenous something that hindered me getting a position (in the industry). I have been extremely lucky that most of my career I was scouted.”

Though finding a job in the industry came naturally to Jamie Lee, she did find some aspects of employment a little stickier than usual. “What I found to be difficult was being in the industry and being used as the indigenous pinup girl to promote and re-band indigenous products.”

“I was under the impression I was going to educate through indigenous practices, ingredients, sustainable wild harvesting using ancient principles and philosophies, however, I started to notice that elders were no longer involved and that ingredients were being imported from another country – I felt betrayed and used! I was pranced around as an ‘Indigenous Trainer’, and told I was going to be the face and a part of the advisory board. I found out the foundations of the company had cut a lot of corners and what I thought to be true was a lie. It was extremely disappointing.”. 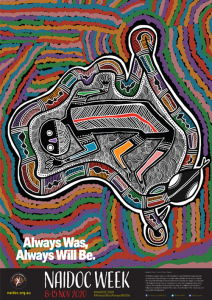 Though creating conversation around supporting NAIDOC week barely scrapes the tip of the iceberg, the conversation has to start somewhere with people who’s voices carry sound and hold weight in the industry. How can you and your business start supporting NAIDOC week by ‘seeing more Indigenous & Torres Strait Islanders in the industry’. “I’ve personally come across very few, even when I was working in Townsville,” says Jamie Lee

“Representing more Indigenous & Torres Strait Islanders means actively going into rural areas where 65% of the indigenous population are and educating these young people to give them the opportunities to open the door into our industry. We can’t expect to open our arms as an industry in major cities and think they will come to us.”

Jamie Lee wants the professional beauty and aesthetic industry and supporting brands to start ‘by seeing indigenous ingredients and recognising them as indigenous ingredients’ otherwise known as native bush food. Jamie Lee adds, ‘I see the quintessential Australian ingredients (such as) the classic Kakadu plum, Lemon myrtle, Davidson plum, Pepper berries and quandong in a lot of Australian made and owned brands and products’, yet ‘I don’t see a lot of non-indigenous brands give credit to the indigenous The First Nations people. I’d like to see acknowledgement, respect and see the legacy of aboriginal people for their own food staples as medicine, instead of increasingly ‘on-trend’ ingredients labelled by cosmetics, pharmaceutical and large food producers’.

“Our people have been using these ingredients for all over 40,000 years, the early settlers landed on our soil in the 1800s. This should be celebrated as native indigenous ingredients and not under the Australian banner. I support Australian made and owned but give credit where credit is due.” – Jamie Lee.

In support of creating an inclusive and diverse community of business owners, therapists and clients it is our responsibility to foster conversations that make us show up better in our businesses and create platforms and spaces that are welcoming of an array of cultures, ethnicities and backgrounds. Jamie Lee plans to use her voice to encourage budding Indigenous therapists to make their way into beauty schools across the country, with hopes for employment in the professional aesthetic and beauty industry in the future.

To see and learn more about NAIDOC week visit the website or their social media platforms, to attend an event near you.